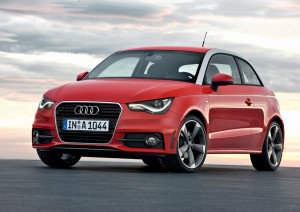 The Audi has just performed at the Paris motor show with an important engine’s innovation of one of its compact car models became more successful. The German manufacter, has just unveiled the 1.4 TFSI Audi A1, version equipped with a 1.4-liter 4-cylinder engine turbo and mechanical compressor used on the Polo GTI and Fabia RS, but in this configuration has 5 hp more , with a top power of 185 hp and 250 Nm.  So the Audi A1 1.4 TFSI 185 hp sprints from 0 to 100 km/h in 6.9 seconds with top speed 227 km/h, comes with a dual-clutch sequential gearbox S-Tronic 7-speed that allows to limit consumption at 5.9 l/100 km average. This version, top of the rangealso features increased front discs to 288 mm  and ESP simulates the behavior of a limited slip differential acting on the brakes. Average prices in Europe at 24,000 Euros. The Audi A1 1.4 TFSI will come on the market later this year. In addition to the seven-speed automatic gearbox S tronic, the equipment includes equipment ‘Ambition’, 17 “wheels, S line pack, manual air conditioning and interior lights with LED technology. This version 1.4 TFSI S-Line will keep up front-wheel drive, unlike the tenders “S” of audi. And, with high probability, will not easily recognizable from exterior: the new setup of the 1.4-liter four-cylinder petrol, will be combined with the pack S-Line, also offered to other version in range.