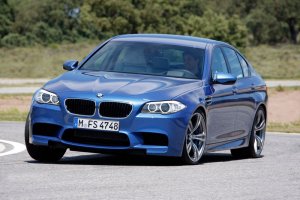 These are the first official images of the BMW M5 based on the new platform F10 of the  5-Series, one of the most important icons of German sedan that stands out for comfort, design and performance.

M DESIGN: the car shows all the format typical of a BMW M: the front bumper with large air intakes, 20 ” alloy wheels and rear diffuser that incorporates the four terminals. The interior shows sports seats and a steering wheel with the logo “M”. Like all M5 built since 1984 , BMW always amazes for the traditional luxury and sportiveness that made the M5 famous all these years.

GETS 300 KM/H: a V8 TwinPower Turbo by 4.395-liter features the direct injection technology with new Twin-scroll twin turbo combined with the dedicated 7-speed M Double Clutch Transmission Drivelogic , cross exhaust manifolds and Valvetronic. The result is a peak power of 560 hp between 6,000 and 7,000 rpm and a top torque of 680 Nm between 1,500 to 5,750 rpm. Although the power of the 2011 BMW M5 goes up to 10% more than the younger generation, average fuel consumption and emissions fall by 30% (9.9 liters per 100 km). According to official data reported by the German carmaker, the new M5 (F10) needs 4.4 seconds in the 0-100 km/h and 13 seconds from 0 to 200. The speed is 250 km/h limited, but fans of this M5, which is close to a supercar, can buy the Driver’s Package, which removes the speed limit and lets fly at 305 km/hour! But is good to remember: only on the track or on the German Autobahn. As on previous model, there is a Launch Control and a new electronic locking rear differential, which is able to transfer up the 100% of the torque on the wheel with more grip, greatly improving traction and stability.

Among leaks is the possibility of a future  four-wheel-drive version . The price in Germany is estimated at € 100,000