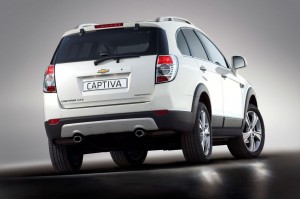 The new Chevrolet Captiva Debuts at Paris Motor Show 2010, this is a restyling of one of the most successful models for the american brand in Europe. The Sport Utility Vehicle has a new design especially in the front, more sculpted bonnet, wider grille, headlights and LED turn signals integrated into exterior mirrors. Also revised the front fenders and side vents. Introduced new colors and now the model can have from 17″ to 19″ wheels. The interior also improves, in fact, Chevrolet has been working on finishing materials and quality perceived by customers, by adopting new inserts, more valuable than precedents, and at the same time the infotainment system has been revised. The appealing and aggressive look is also given by some interesting customizations in the cockpit (available in two versions, 5 and 7 seats).

The most interesting news, however, are reported under the hood where, with four new engines with a unedited manual or automatic transmissions, both 6-speed. The engine range now consists of two petrol 2.4-liter, 171 – 3.0-liter 258 hp and two turbo diesel 2.2-liter common rail, available in two power levels, 163 and 184 hp. The 2.2 turbo diesel and 2.4 petrol are available in both two and four-wheel drive. Chevrolet Captiva arrives in Europe in the spring of 2011.