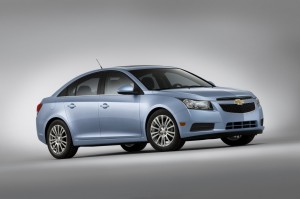 The new Chevrolet Cruze Eco was presented at last International Motor Show in New York, the new version has been designed to treat the fuel economy issue and the environmental friendliness. The first Cruze model debuted in European market on spring 2009, in China last summer and recently in the U.S.. Around 150,000 of Cruze were sold in first six months of the 2010 and that helped to increase Chevrolet’s global sales of 20%.

Reduced consumption and smart aerodynamics: Chevrolet contends that new Cruze Eco will get more than 40 miles per gallon of gasoline, (17 km per liter) thanks to the General Motors innovative automated system of the air flow that allows to change the car aerodynamics, this adapt to different driving conditions (the front grilles are open and close depending on speed). The consumption values are comparable to a hybrid car, but without the cost of a hybrid, a consumption of 5.88 liters per 100 km is a good result, but not so much for Europeans that are used to diesel engines on long distances. Among changes overall, there is also the lowering suspension and low rolling tires combined with four 17 ” alloy wheels .

New Engine: the new Chevrolet Cruze Eco comes with engine 1.4 liter 4-cylinder Ecotec turbo 138 hp and 200 Nm of torque, six-speed manual transmission.
Cruze Eco goes on sale in the U.S. market in the coming months at price of $ 18,900, about 14,700 euros (today currency). Marketing in Europe is planned for late 2010.

Next post: LEXUS CT 200H – THE HYBRID WANTS TO SCARE BMW AND AUDI