General Motors led, at Paris motor show, the new Chevrolet Orlando, compact crossover, after exactly two years from the Chevrolet Orlando concept debut. This is a car that combines a minivan’s spaciousness (seats up to seven passengers) with the SUV’s look, slightly raised body, and which enshrines the debut of the American manufacturer in the segment. The new Orlando, in fact, is the first Chevrolet to debut in the segment of the MPV, combines the comfort of a family car, with nice typical crossover design, which will have to deal with tough competitors like the Volkswagen Touran, Opel Meriva and Honda FR-V. The new 7-seat Orlando still keeps a fairly low line setting, the traditional Chevrolet grille which is split horizontally into two parts and the inevitable widened wheel arches that can have 16, 17 or 18 inches wheel. At the bottom there is a kind of underbody protection, with only aesthetic function. In the rear view you can see the roof rails that extend up to tail lights and the small shaped rear window. Inside the Interior lets appreciate the spacious feeling encouraged by the special arrangement of the rear seats rows, which are slightly raised and also allows passengers to enjoy a good front view. Have not yet been released official images of interior but design and instruments panel should be similar to the Cruze sedan, which is made by a center console that incorporates the multimedia system screen, many storage compartments, one behind the audio controls. The engines offered on the Chevrolet Orlando are the 1.8 petrol 141 hp, and two 2-liter turbo diesel with 131 or 163 hp power. At European level, Orlando is offered in three equipment levels, all equipped with standard ESC, air conditioning, 6 airbags and electric mirrors. Production start is scheduled for next October 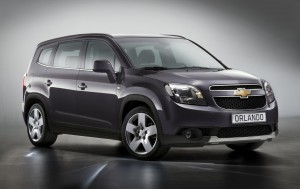 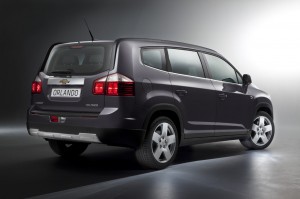