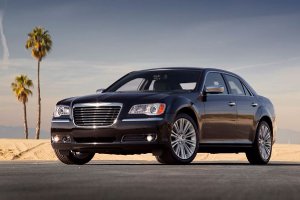 At the upcoming Detroit Auto Show (January 10 to 23) the Chrysler 300 C is eagerly awaited. The  American flagship is one of the most important models of the Chrysler Group, because from its base will come a new rebadged version for Lancia brand, expected in March at the Geneva Motor Show, which could still be called Thema. The rear-wheel drive will be the main feature of the new Chrysler 300 C, maintaining the chassis features of the Mercedes E-Class (model W210, 1995-2000), with the longitudinal front engine and rear traction.

STATION WAGON FOR EUROPE: Lancia brand have never awaited so much a car presentation that is built in the United States, the new Chrysler 300 C arrives at the American event as sedan, the most popular version in the United States. Different approach is  for  the European market, where customers of the segment E (where competing Mercedes BMW 5 Series, Audi A6 and is target markets for the future Thema) prefers the station wagon, bought as an alternative to the SUVs.

CLASSIC STYLE: Compared to the current model, born when Chrysler was owned yet by Daimler, the new Chrysler 300 shows most simple lines to best fit the car’s on several markets: the flashy grill on the nose goes away to leave the place to a grille with chrome laths. The headlamps are now much thinner with LED lights that features the front design. Behind, however, the Chrysler 300 C retains its old style: vertical headlamps, dual exhaust with chrome tailpipes and logo (redesigned) with wings at the center of the trunk. To light the shapes and at the same time to improve the aerodynamics, the door pillars are been reduced and the windscreen has been moved back a few inches.

ENGINES: suspensions are featured by the control electro-hydraulic damping, which in the variant could reuse the  Lancia Sky Hook’s Thesis system, updated and revised for the new chassis application. The Italian-American flagship will be based on the Pentastar V6 3.6-liter 292 hp and the V8 5.7-liter Hemi with 360 hp, which will cover customers in the U.S., and diesel engines dedicated to the Old Continent. The most logical  updating choice should be the 3.0-liter V6 by Mercedes, that still meets the Euro 4 and the adoption of the recent four-cylinder 2.2 CRDi with 163 hp of the Jeep Compass, recently revised. It is unclear whether the 300 C wagon, which has been fairly a successful model in Europe, will bring also a replacement version named Thema