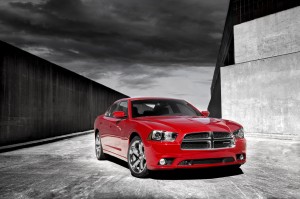 The Dodge has released images of the new Charger, car reserved for the U.S. market, for now, available in version SE, Rallye and R/T. The new Dodge Charger inspired by the myth of the homonymous muscle cars of the sixties, got a facelift and offers a new front with wide chrome cross which debuted on recent Durango, the windshield is more sloped, wheel arches in this case are wider and the underbody has been faired to optimize airflow. Changes, finally, to the rear where stands the large optical unit with more than 164 LED lights. As for aesthetic, the Dodge Charger interior offers superior quality materials than the earlier model, changed the steering wheel and introduced a new integrated infotainment system with navigation, dual zone climate control and satellite radio. Dodge Charger 2011, produced in the Canadian plant in Brampton, is already available in the U.S. with the fitting SE Rallye Pentastar equipped with V6 engine of 3.6 liters and a Charger sportier version R/T powered by a 5.7-liter V8, two-or four-wheel drive ( AWD). The Dodge Charger R/T AWD features a modified chassis, 19 ” wheels and the transfer of the traction system that passes automatically from the back to the full, providing even to disconnect the front axle for energy savings ip to 5%. The only way to see the new sedan in Europe is linked to the announced birth of the distribution network of special cars that Dodge will replace the current organization of the American brand in Europe.