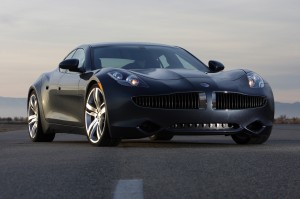 PRICES RISES 10%: Fisker Automotive, on the other hand, said that compared to the initial price of $ 87,900 (€ 67,000), announced a couple of years ago, only 10% diverged. The company, meanwhile, recently signed an agreement with China to sell its vehicles in the country.

The Fisker Karma four-door sedan comes with rear frameless glass door. Fascinating is the long hood of great size: 499.6 cm length, 198.4 cm wide and 133 cm height. The car is very low and ready to “bite” the asphalt. High is the car wheel base: 316 cm. Shown in Europe at the Paris Motor Show, the Hybrid Karma sport sedan is powered by two electric motors each of 150 kW and an engine of GM Ecotech 2.0 liter turbocharged direct-injection of 260 hp. According to datas supplied by the manufacturer, on Sport mode, the car speeds up to 100 km/h in 5.8 seconds and reaches a top speed of 200 Km/h. The range is 80 km with only electric charge and 403 km with hybrid power. Recharge time varies from 6 to 14 hours, depending on the power socket and the voltage used