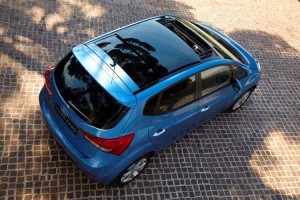 Among the many innovations of the Paris Motor Show, Hyundai presented models and upgrades that hit the market soon, all by the end of the year. The most interesting is the ix20, compact van that intended by the manufacturer, should be antagonist to a Lancia Musa, Citroën C3 Picasso, Renault Modus and Vauxhall Agila. After a first sketch released early last month, Hyundai has removed the veil from the ix20 at Paris Motor Show. The new car is built on the same mechanical base of her ‘cousin’ Kia Venga, ix20 has already front features from the Suv ix35, with the typical hexagonal grille. It’s long time now that the car manufacturer Hyundai has launched its program for sustainable mobility ‘Blue Drive’. New technology this, specifically designed to respect the environment and reduce fuel consumption, it will be implemented on various models of the brand, such as Hyundai i10, Hyundai i20, Hyundai i30 and Hyundai ix35, but only at the Paris Motor Show 2010 has been possible to see live . The ix20 will have a fairly comprehensive standard equipment, as air conditioning, Stop & Start system, ESP, Bluetooth and side/head airbags. Although aimed to a diverse audience, the new ix20 is designed primarily for young families looking for space on board and full equipments. The two petrol engines available are 1.4 and 1.6 liters (90 and 126 hp) and an efficient diesel 1.4 CRDi 90 hp. These engines combined with other solutions, such as low rolling resistance tires and Start & Stop system, allows ix20 to save 0.2 to 0.5 liters per 100 km. The car goes on sale, in europe, starting from November at average price set at 15.000 euros.