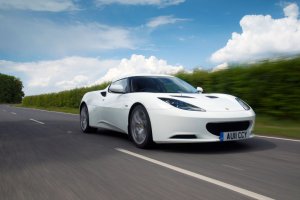 The 2011 Lotus Evora IPS (Intelligent Precision Shifting) is the 4 seater (2 +2) with sequential-automatic transmission, initially presented at the London Motor Show in 2008 and actually sold in 28 countries worldwide.

The interior of the grand tourism stands out the leather that covers the bucket seats and dashboard which shows metal polished details but there are also soft plastic and other rich materials such as the Alcantara.

The Evora IPS engine, Toyota-derived, is a 3.5 V6 is 280 hp and 350 Nm of torque, combined with six-speed automatic transmission. The gearbox comes with paddle shifter, controlled by the central unit TCU Lotus which features two drive mode: “Drive” for city driving or long trips and “Sport” to fully exploit all the power. Regarding the performance, the British GT gets top speed of 250 km/h and takes 5.5 seconds from 0-100 km/h. As Underlined by the CEO Dany Bahar, the Lotus Evora IPS was designed to Satisfy the needs of potential customers of markets in north America, Asian and Middle Eastern. According to Lotus statements, the Evora IPS has an average fuel consumption, of 8.8 liters per 100 km with CO2 emissions to 208 g / km, thanks also to the aluminum frame that gives a total weights of 1,436 kg, .