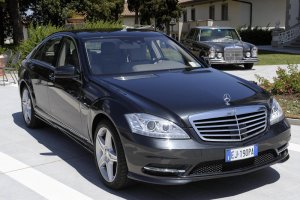 The Mercedes is celebrating a double anniversary, the 125 years after the founding of the brand and even the 60 years of the S-Class. To celebrate the event the German carmaker has unveiled the Mercedes S-Class Grand Edition, developed by the AMG Performance Studio, to join the Elegance and Avantgarde versions. The new S Class has a sportier design thanks to some details provided by the S63 AMG version.

The changes on the Mercedes S Class Grand Edition concerned the use of 19 ” AMG light alloy wheels with five double spokes combined to front 255/40 tires and 275/40 for the back, while the brake calipers come with dedicated tint silver-gray metallic. Daytime running lights Front exploit the LED technology that is standard as the Intelligent Light System and the adaptive headlights. The Mercedes S-Class Grand Edition shows all its sportiness thanks to the big front spoiler while the interior shows leather and wood to the steering wheel, inserts of black ash and aluminum sports pedals. The Mercedes S Class Grand Edition also provides the multimedia Comand APS, the Music Register, the voice control device VoiceTronic , Speed ​​Limit and Parking Assist Pack with Rear Camera, which is available for all the S-Class Grand Edition except the S 250 CDI Bi-turbo.

The S-Class Grand Edition comes with two petrol and two diesel engines, which includes the 4-cylinder S 250 CDI bi-turbo by 204 horsepower. According to official statements, the new S-Call Grand Edition promises a consumption of 5.7 liters per 100 kilometers. The V6 diesel S 350 BlueTEC by 2,987-L delivers 258 hp and 620 Nm of torque, ensuring excellent value in terms of fuel consumption and emissions, deploying the S-Class diesel cars among the most green car in the world, thanks to the BlueTEC technology. The petrol engines of the S Class Grand Edition include the  V6 S 350 BlueEFFICIENCY by 306 hp with a torque of 370 Nm and the new V8 S 500 by 4.6-liter with 435 hp and a torque of 700 Nm.

The prices of the Mercedes S-Class Grand Edition.

Next post: Mercedes C 63 AMG Coupe Black Series most potent iteration of the C-Class ever