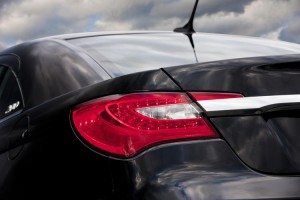 Chrysler has released first images of new version 200, the midsize sedan that would – in future – also be sold under the brand Lancia. The Chrysler 200, which replaces the Sebring, will have its presentation scheduled in November, at Los Angeles Motor Show and will arrive in U.S. dealerships later this year. However, it seems that the lines of the car to be inspired by those of  200C Ev Concept presented at the Detroit Motor Show in 2009. In a brief press release, Chrysler says that the 200 will be available in the U.S. with two petrol engines: the 2.4 with a 4-speed automatic gearbox and 3.6 V6 Pentastar 283 hp with a most advanced six-speed automatic transmission. According to the press, the major renovations that we see on the Chrysler 200 exterior regards in the bumper, the grid (which will host for the first time the renowned logo of the house), the bonnet and tailgate. In addition, other changes are expected to cover both headlights (now with LED daytime running lights) and rear (fully Led). The new Chrysler 200 will be manufactured at Sterling Heights, Michigan, marketing will be launched towards the end of 2010