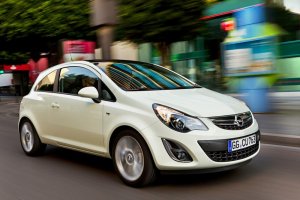 The Opel Corsa LPG EcoTec is the first model with the new bi-fuel petrol/LPG.

After Corsa and Meriva, the German carmaker Opel launches the version Corsa LPG EcoTec, which uses the bi-fuel combustion EcoTec  petrol/LPG and to be fitted on other models as Tourer Zafira, Astra, and Insignia. The bi-fuel petrol/LPG promises significant fuel economy by about 40%.

The new Corsa LPG EcoTec, which is already on the list of major Opel dealers, has a 1.2 85 hp engine, unlike the Meriva that has been fitted with the 1.4 turbo 120 hp, which will be also used on further three bigger models, mentioned above. The Opel Corsa LPG EcoTec Delivers 61 kW/83 hp with LPG and 63 kW/85 hp with petrol mode. The system for the LPG supply has been enhanced with specific valves (intake and exhaust) and strengthened their base to withstand the increased wear of this type of fuel, much less lubricant.

The CO2 emissions of the Corsa LPG EcoTec depends on the version, as the 3 doors produces only 110 g/km of CO2, while the 5-door version is less efficient with its 115 grams. According to the firm of the “Lightning”, the Opel Corsa LPG EcoTec has a range between 1,100 and 1,500 kilometers, which are gained with either a full tank of petrol and one of gas.