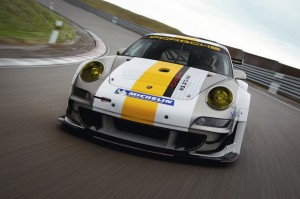 The 2011 version of the 911 GT3 RSR has been revealed, it is the last expression from the motorsport division of the german carmaker, who won over the past years already in GT2 competition , in the 24 Hours of Le Mans, in 24 Hours of Spa-Franchorchamps and in 24 Hours of Nurburgring.

THE FACELIFT: The MY 2011 has introduced a new front spoiler, which should increase the downforce. The front wheels are larger, to improve grip and reduce the understeer. The rear spoiler has been also modified, relating to his position and of its supports shapes, and therefore the hot air extractors across the rear of the car, while the headlamps have received the LED technology Just like the production version from which it derives.

MORE POWERFUL: Compared to its predecessor introduced in 2009, the new version offers an increased power to 455 hp (+5 hp), obtained through a new electronic engine management system optimized for most types of petrol and thanks to a different conformation of intake and exhaust ducts. Unchanged are the maximum rpm of 7,800, and the over limit set at 9,400 rpm.

FULL SAFETY: The 2011 Porsche 911 GT3 RSR take the 90 liters safety tank, Sachs suspension, double coil springs on each wheel and a braking system consisting of 380 mm front ventilated discs and 355 mm rear, with 6-4 pistons calipers. Obviously there are mandatory safety equipment like fire extinguisher, full roll bar, racing seats and six-point belt with adapter for use of the HANS system.

Article across the web