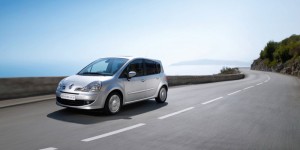 Renault has released first images of Modus model year 2011, its compact SUV, also available as extended version Grand Modus. The French company has decided to focus, without changing, to a range refinement that includes, first, the arrival of new Euro 5 engines and two new trim level ‘Attractive’ and ‘Night & Day’, instead of  ‘Expression’ and ‘Dynamique’ available up today. With first level are standard equipment, four airbags, manual air conditioning and a radio CD-mp3 player. ‘Night & Day’ trim, includes curtain airbags, automatic climate, fog lamps, cruise control and rear parking sensors. For both models, short wheelbase or long wheelbase, the base-of-range version Attractive is only available with engine 1.2 16v 75 hp eco2 and 1.5 dCi 75 hp eco2, and the most complete version Night & Day is instead matched also with engine 1.2 TCe 100 hp eco2 , 1.6 16v and 1.5 dCi 110 hp eco2 automatic transmission, but only 90 hp. The price list for the 2011 model year Renault Modus starts around 12,000 Euros, while the Grand Modus has a base price of 13,000 euro, available in fall.