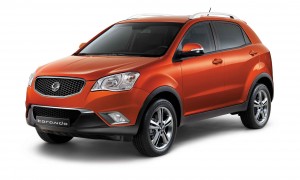 The SsangYong brand ,after the acquisition by Mahindra, starts again with new fourth-generation Korando, two years after the economic difficulties of the C200 concept presented at the 2008 Paris Motor Show, which will be inserted in the middle crossover segment where it will compete especially with the Japanese manufacters. The name Korando, is ready to entry into one of the most vibrant and competitive European car market with the intent to seduce and satisfy it with new elegant and modern shapes of this SUV, expertly drawn by Giorgetto Giugiaro on the first monocoque of the twin Dragons brand. It ‘s a modern crossover with balanced proportions (4.4 meters long, 1.83 wide and 1.7 high with a wheelbase of 2.65 m) and aesthetically not afraid of comparisons with competitors. The SsangYong Korando will be on sale in Europe since the end of October in two different variants: the only front-wheel drive or 4WD that, equipped with an electronic system, distributes the drive between front and rear according to the needs of road grip. This SUv is made with unprecedented Chassy, which will result, at least, in three more new models.

The SsangYong Korando adopts a refined mechanics: the suspension includes front MacPherson and rear multi-bar. The engine is completely new: it is a 2-liter turbo diesel 175 hp complying with the Euro 5, which was developed internally by the Korean manufacter, combined with a six-speed manual transmission or a six-speed automatic. Towards the end of next year will come a 115 hp petrol and a turbo diesel 149 hp. Prices should start from 19,500 euros to reach 29,000 euros (average).