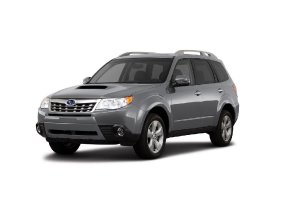 Subaru unveils the 2011 Forester facelift, from previous model there is no substantial style’s differences but there are interesting new features like the new 4 cylinders 2.5-liter boxer engine fuel efficiency optimized, low emissions and with higher dynamic performance.

LIGHT FACELIFT: little change outside, the grille has a slightly different design, as well as alloy wheels. The rest of the updates regards pack levels and optional such as Bluetooth, automatic system for the driver, always standard. The Top range “Premium” and “Touring” offers more other accessories such as xenon headlights, dual zone climate control, rear parking camera and audio system with six speakers, USB and AUX inputs.

THE NEWS IS THE ENGINE: the announcement of the new 2.5-liter boxer engine, compared with the previous model still used for the XT version comes revised in the piston stroke and the double overhead cam shaft head while maintaining the power to 170 hp, these improvments allows an increase in torque which now stood at 236 Nm. Both manual and automatic gearbox in the renewed 2011 Forester 2.5X states that lower fuel consumption such 11.2 l/100 km in urban and 8.7 l/100 km in highway.

TS FORESTER FOR JAPANESE ONLY: This version is designed for the Japanese market, the Subaru Forester tS is a sporty version of the SUV. Based on the STI version, this special series tS has been creates, it’s lowered by 15 mm,  has special springs, custom alloy wheels and black Alcantara with red finishing. Forester tS is produced in limited edition of 300 units, and already sold in Japan at a price of 3,622,000 yen (currently about 32,000).