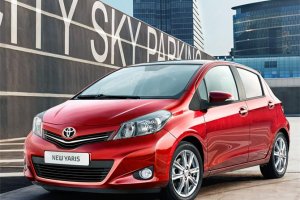 In recent days first pictures of the new Toyota Yaris (Vitz in the Japanese market) have appeared on the Web, a model destined for European markets that will be officially presented at the 2011 Frankfurt Motor Show in September. The model will be for sale by the end of 2011 at about € 11,000.

The Japanese city car of the segment B has now arrived with its third generation and is featured by its new design, which is a little more sporty, especially in the front V-shaped grille and protruding lines. At first glance, the new Yaris conveys a pleasant feeling and overall the car appears stylistically balanced and should make it more attractive to the male audience. New are also the interior, where stands out a dashboard that shows the classic instruments behind the steering wheel, replacing the one with the classic instrumentation at the center as the current model. Than before, moreover is longer than 8.5 cm and promises greater comfort thanks to a increased wheelbase (+5 cm). The 2011 Toyota Yaris will be available in a brand new hybrid version powered by a 1.5-liter petrol engine combined with an electric motor by 80 hp with lithium-ion batteries.

We await further news about specifications and prices.