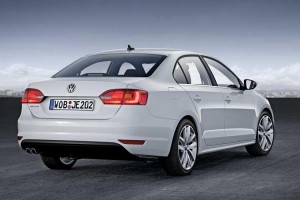 Volkswagen has released first official images of  new Jetta 2011 for European markets. This is the sixth generation for jetta, sold from 1979 to today in about 9.7 million units and represents an important car model in the U.S. market. Indeed, after the presentation in New York for the American version, the Jetta is proposed to achieve the same success in Europe, bringing the debut of new platform with 265 cm wheelbase that increaseas the car lenght up to 464 cm. Compared to the american version, the European Jetta has more advanced multilink rear suspension, replacing the torsion beam. 2011 Jetta is available in Europe with petrol engines from 105 hp 1.2 TSI, 1.4 TSI with 122 and 160 hp, 2.0 TSI 200 hp, while the supply of diesel engines is limited to 105 hp 1.6 TDI and 2.0 TDI 140 hp. All engines except the 1.2 TSI, DSG can be matched to the dual-clutch sequential gearbox. The car is available in BlueMotion Technology, equipped with the 1.6 TDI 105 hp wich consumes 4.2 liters of fuel per 100 km and emits 109 g/km of CO2. The pricing of new Volkswagen Jetta, in Europe, start at around € 20,000.