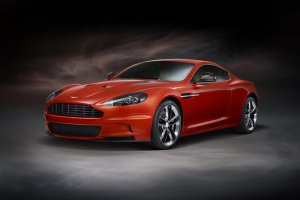 The British car manufacturer has released pictures and prices for the 2012 Aston Martin DBS Carbon Edition, which features the brand V8 engine with 426 horsepower (6-hp more than standard). The available configuration of the DBS Carbon Edition is Coupe and Volante which means Spider.

The Aston DBS Carbon Edition will be offered in three colours, next to the Carbon Black colour debuted on the DBS Carbon Black: two new colours are Flame Orange and Ceramic Grey. The new DBS Carbon Edition gets the same special car paint treatment with seven layers that are then hand polished for 25 hours. In addition, Aston Martin will now also offer a satin lacquer finish that creates a silk like texture. DBS Carbon Edition features 10 spoke gloss black diamond turned wheels with a reversed diamond turned or full gloss black finish available as an option alternative. The interior gets obsidian black or Maranello orange semi-aniline leather upholstery while the dashboard features carbon fiber inserts. As reported by the automaker, the cabin of a Aston Martin DBS Carbon Edition would take over 70 hours to hand stitch and finish.

The engine send the power the rear-wheels through a six-gear manual or Sportshift automated manual transmission. Performance of the car remains the same with the 510 horsepower V12 engine under the hood.