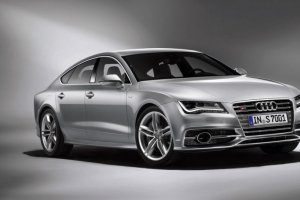 2011 Frankfurt motor show will be the stage for world premiere of the sporty versions Audi S6, S6 Avant, S7 Sportback and the flagship S8.The main innovation regard the engine, a innovative 4.0-liter V8 with two turbochargers and offered in two power levels, which is a common characteristic to new models. Referring to the new Audi S7, is fixed to go on sale in Europe in the spring of 2012. The Audi S7 Sportback with the new engine delivers up to 420 horsepower and 550 Nm of torque that is enough to accelerate the S7 from 0-100 Km/h in just 4.9 seconds and see the Audi S7 Sportback easily reach its electronically limited top speed of 250 Km/h.

S7 Sportback with Cylinder on Demand.

The seven-speed S tronic dual clutch transmission sends the Drive to all four-wheels and the Quattro permanent AWD system gets a self-locking center differential and torque vectoring function. An important update concern the audi’s new “cylinder on demand” technology that advantages the advanced V-8 FSI engine, enabling some of the cylinders to be deactivated in order to improve the gas efficiency. The german auto maker claims fuel consumption rate of up to 9.7 liters per 100 km on the European combined cycle, while the Speed adjustable steering is available as an option. Much this efficiency can also be attributed to the Audi S7 Sportback lightweight body, which comes with an hybrid aluminum conception and weighs roughly 15 percent less than a equivalent all-steel body.

Besides the exterior look, the S7 Sportback is also recognized in the cabin beyond many “S” logos positioned everywhere, show up the sports seats blanketed in Alcantara and leather. Standard equipment also include adjustable active suspension and 19-inch wheels, while the carbon-ceramic brakes discs are on request. The Audi S7 Sportback is on the market with nine colors, including the Estoril Blue and Silver Prism.

Next post: 2012 Focus ST hatchback for America and wagon for Europe