2012 BMW 6 SERIES COUPE ahead of debut at Shanghai 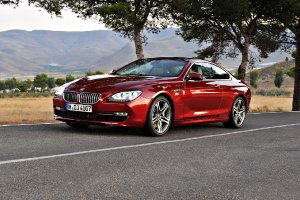 The German carmaker has released the first official images of the BMW 6 Series Coupe which the style were previewed by coupe concept exhibited at the 2010 Paris Motor Show.

The body incorporates design elements of the convertible version but the size increases  respectively by 7.5 cm in wheelbase, 3.5 cm wide offering more comfort and space to rear seat passengers. The height decreases slightly than previous model.

The BMW 6 Series Coupe will have two engines, the first is a petrol V8 TwinPower Turbo Direct Injection that delivers 407 horsepower at 5,500 rpm and 600 Nm of torque at 1,750 r.p.m., according to data released by BMW, top speed is 250 km/h (limited) and the sprint from 0 to 100 km/h is 4.9 seconds, while fuel consumption will average 10.4 l/100 km with CO2 emissions of 243 g/km. The other engine uses the same technology TwinPower Turbo and direct injection, the six-cylinder (2,979 cm3, 320 hp at 5,800 rpm, 450 Nm at 1,300 rpm) and will be offered on the 640i BMW Coupé. Top speed is almost the same and from zero to 100 km/h takes 5.4 seconds, while fuel consumption and emissions are reduced, respectively, 7.7 l/100 km and 179 g/km. Both engines matches the BMW EfficientDynamics technology and the eight-speed automatic transmission. BMW 6 Series Coupe will arrive in dealerships this fall.