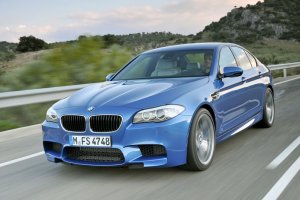 There are many of ways you can support your country’s sportsmen heading into the Olympics. As London 2012 official Olympic partners BMW have chosen to create a video to wish the athletes best of luck in the fast approaching Olympic games. This is fine by us, because Bavarian car maker offers us the chance to watch its new twin turbo BMW M5 on a wet sandy beach beach filled with seagulls.

The amazing video below consist of Wolfgang Weber a popular stunt driver pulling doughnuts on the beach at Pendine Sands in Wales. The Olympic figure drawn in the sand at the end of the video, refers to the Olympic Games coming to London in the next year.

The 2012 BMW M5 super-sedan is driven by a 4.4-liter (4395cc) 560hp twin-scroll turbocharged V8 engine instead of the old naturally aspirated. The new super sporty sedan can hit 0-62mph or 0-100Km/h in 4.4 seconds – under 4 seconds using BMW’s new Launch Control – and get to 124mph or 200 Km/h in 13 seconds. These numbers have been achieved thanks to the 680Nm available from only 1500rpm, the new TwinPower Turbo technology, VALVETRONIC variable valve control, the high-precision direct fuel injection and a new exhaust manifold.

Previous post: 5 Units of the New F&M Evantra Will Be Available in 2012