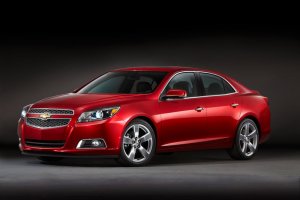 The Malibu represents, according to Chevrolet, the first overall midsize sedan to be launched in over 100 countries around the world, until now it bow at the New York International Auto Show.

Chevrolet Malibu uses the Epsilon II platform to be more compact of the present generation: is 4.86 meters long, 1.85 wide and high 1.46. The main difference between the two versions emerge in the wheelbase, which in the new Malibu is 2.74 meters and decreases of 11.4 cm. Concerning the interior, Chevrolet folks tried to make them more elegant and refined with wood inserts around the gear lever, on the doors and on steering wheel spokes, chrome details and leather seats with contrasting stitching. Alloy wheels range from 16 to 19 inches. The American sedan also features 462 liters of luggage compartment, while the interior is spacious, 113 liters more compared to precedent model. The mechanics shows MacPherson front suspension, while the rear uses a multi-link system.

Among on-board devices, there are some online services such as radio with Internet connectivity and the Stolen Vehicle Slowdown strategy. Passive safety features include up to 10 airbags, while active one has in addition the ESC, the lane change warning systems and anti-collision, but those depending on the destination markets.

At launch, the Chevrolet Malibu comes with a non-turbocharged four-cylinder 2.5 Ecotec direct injection, for which the specifications are still unknown but should have 193 hp and 245 Nm of torque, combined only to the six-speed automatic transmission. The North-America marketing will be active by 2012 and submitted by a organized catalogue according to the version LS, LT and LTZ, with ten body colors and four for the interior. The European version will be announced in the coming months, however, is already confirmed the presence of 4 and 6 cylinder petrol and diesel engines, LPG and bifuel versions with manual and automatic transmissions.