2012 CHRYSLER 200 CONVERTIBLE to be Lancia Flavia in Europe 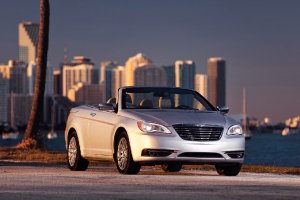 The Chrysler 200 Cabriolet was not present at the Detroit Motor Show (15-23 January 2011), but Chrysler and Fiat CEO Sergio Marchionne announced the arrival in Europe of a Chrysler 200 convertible version with the badge Lancia. Timely confirmation came from the first official images of the renewed 200 derived from the Sebring Convertible. The most interesting news though is that this open four-seater will be in Europe as Lancia Flavia Cabriolet to reproduce a type of car that Lancia is missing more than 40 years from the list, since times of Flavia Convertible.

It comes with a classic and clean styleeatured by a grille with new Chrysler logo that separates the two clusters feature LED lights that are hallmarks of all new models of the American car maker. The cockpit can accommodate up to four passengers arriving in a sober and elegant environment, with generous interior distinct from the central console positioned vertically and incorporates the 7-inch screen of the multimedia system and the air conditioning panel.

Under the hood of the Chrysler 200 Convertible will certainly have place the four-cylinder 2.4-liter, 173 horsepower combined with an automatic transmission and the new 3.6-liter V6 Pentastar 283 horses. For europe, however, there are also diesel engines.