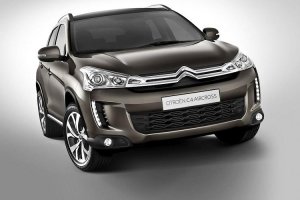 C4 Aircross, one of the French’s firms strategy to promote their Suvs.

PSA Peugeot Citroen Group is boosting its SUVs range introducing two compact vehicles: the Citroen C4 Aircross and the Peugeot 4008. Based on the Mitsubishi ASX and created as part of an OEM contract between the French car maker and it’s Japanese partner, both cars are different nearly just on the exterior. In this article we’re going to write about the Aircross, that want to remake the rules of compact SUV design and style, getting together modern day styling and technological improvements, combining the handling of an off-roader with the reliability and comfort of a flagship.

The styling of the C4 Aircross highlights the sculpted horizontal lines, the LED lights integrated in the vertical vents at the front and the tail-lights inspired by the Hypnos concept from 2008 Paris Motor Show. The bonnet is all visible from the driver, while the wide wheel arches with 18 ” wheels and the reduced front and rear protrusions all combine to enhance the overall impression of robustness. To complete the sophisticated design has been added indicators in the door mirrors, light guides in the rear and a reversing camera incorporated into the chrome trim on the tail gate.The new SUV is 4.34 m in length, 1.80 m in width and 1.63 m in height, and has a luggage compartment space of 442-liters.

Ecologically considerate a vehicle with the lowest CO2-emissions in its segment, like its counterpart Peugeot 4008, the C4 Aircross engine range consists four engines with a latest generation four-wheel transmission procedure, providing optimal handling in all conditions: 2WD, (optimal fuel consumption), 4WD, (distributes the torque between the front and rear axles) and ‘Lock’ (maximum traction). The HDi 1,6-L 115 Hp and 152 Nm engine is mated to a 5-speed manual gearbox will only be available with front-wheel drive, while two turbodiesel 1,6-L 110 hp and 270 Nm of torque and the 1,8-L with 150 hp and 300 Nm of torque will have the option of four-wheel drive as well. Available also a 2.0-liter 150 Hp petrol which won’t be sold in Europe.

Offered with two and four-wheel drive variants in some markets, the New Citroën C4 Aircross will be launched in Europe at the end of the first half of 2012.