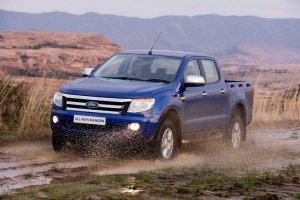 After being awarded with a five-star safety rating in the Euro NCAP crash tests, the global truck Ford Ranger gets to Europe’s dealers. The new Ranger, code-named T6, is the first built under the One Ford global Strategy and sold in 180 countries around the world. It will be available with three versions: Single Cab, Super Cab with a second row of seats and a spacious five-seat Double Cab. The new pickup con be ordered also with a bed, with a aluminum tray on the back and with two or four wheel drive.

Compared to its predecessor, the Ford Ranger comes with softer shapes, a front with shorter overhang and a more curved windshield. This brought the Ranger’s coefficient of drag to 0.39. A rear spoiler is built-in into the tailgate, while the wheel arches receive a full metal panels. Despite the increased size, 5.35 meters long and 1.85 wide, the handling continued to be great thanks to a more responsive steering system that turns completely left-to-right and vice versa with no more than 3,5 turns of the wheel. A power outlet in the top of the gap between cab and bed liner is available on the 3.2-liter model, while not far from there a 12-volt power socket allow owners to run a camping air-pump or portable fridge.

To improve the comfort, the car maker added to the cockpit several storage areas and compartments, including a 8.5-liter cooling-box under the center console and one more under the second row of seats. On this new truck made for European’s tastes, designers payed attention to latest technological devices as electronic climate control, Bluetooth, radio with voice control, CD player and USB port and . Buyers can order optional, cruise control, dual-zone climate control, and a 5″ screen with satellite navigator. At the safety level, the 2012 Ford Ranger features the ESP, which incorporates the Hill Descent Control, Hill Start Control and the emergency braking system. For the first time on the model, also, standard side curtain airbags on all versions.

The Ranger’s shows a water-going ability among the class-leading in the segment. In fact the pickup is able to tow up to 3,350 kg and go with its cargo through up to 30 inches of water. Two engines available both diesel, the more powerful 3.2-liter delivers 200 hp and 470 Nm of torque between 1,700 and 3,500 rpm. The second power unit is a 2.2-liter four-cylinder with 150 hp and 374 Nm of torque, while later will follow a new 125 hp version. All the new Ranger model will feature both a manual or the six-speed automatic gearbox.