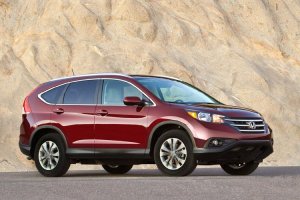 After some photos leaks, Honda has introduced the fourth-generation 2012 CR-V that has been unveiled at the 2011 Los Angeles auto show. Even if its debut wasn’t a big surprise the new Honda CR-V is getting a complete revamp, with a more evolutionary styling than a drastic change. Like the current model, the new car will be a dominant entry in the small crossover segment.

The latest new styling features include a lowered cargo floor and fast folding rear seats. Those innovations sound to be not very important but Honda will count a lot on these features alone. The CR-V is similar to its predecessor concept, including the curious huge tail, which looks very prominent. The Japanese SUV has been unveiled on the same event of the 2012 Ford Escape, one of most future competitors.

The CR-V will be available in both FWD and AWD variants and will be available in two trim levels – the base LX and the EX. The compact SUV is powered by a 2.4 liter i-VTEC four-cylinder engine with 185 hp and 221 Nm of torque, everything coupled with standard five-speed automatic transmission.

The new Honda CR-V goes on sale in America since December 15. Then should arrive in Europe’s market in the next spring of 2012.Pricing has not been announced, but Honda claims it can be between $21,200 and $30,300.

Next post: Lamborghini Gallardo LP 550-2 Spyder the cheapest open top in the brand