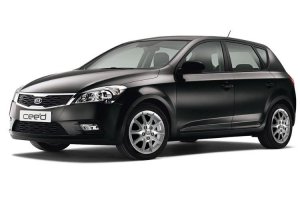 The Korean model 2012 Kia Cee’d updates its range with new equipment Platinum and a diesel engine Euro 5, which has been revised to cut fuel consumption and CO2 emissions. The 2012 Kia Cee’d will be available as two versions, both 1.6-liter turbo-diesel by 90 hp and 115 hp, all meet Euro 5. The version with the smaller engine, according to Kia, decreases in consumption at 4.2 l/100 km, while improves in emissions at 110 g/ km of CO2. The most powerful version emits 115 g/km, while the current version shows 118 g/km.

The aesthetics of the 2012 Kia Cee’d include a new front end design sleeker and modern, to meet tastes of Europeans, but not so different from the previous design. The news for the 2012 Kia Cee’d is about the Platinum package, which is intermediate compared to the base LX and the top Ex. Among the new standard equipment, the extra fog lamps, color keyed electric and heated door mirrors, 16-inch alloy wheels and also fog lamps in key tint. 2012 Kia Cee’d models with package Ex, in addition to the basic fitting, also features tinted windows, parking sensors, rear electric windows, air conditioning with dual zone automatic control and Bluetooth connection.

The length of the 2012 Kia Cee’d increases by the use of most projecting bumpers as of 2 cm giving a total lenght of 4.26 meters for the version Kia Cee’d Face Lift and 4.49 meters for the Kia Cee’d  SW Face Lift. To complete the look.

The new layout Platinum will cost 500 euros more than the basic version Lx, which with the variant 5-doors costs from around 15,200 euros. Regarding prices of other versions, from 17,300 euros for a diesel and from 16,000 euros for the 2012 Kia Cee’d Platinum Sporty Wagon .

Next post: Volvo S60 Performance Project a show car based on the S60 T6 R Design