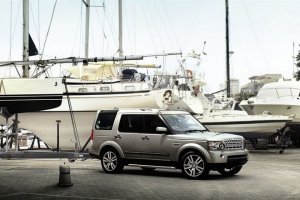 The new Discovery 4 is More Green.

The new Land Rover Discovery 4 comes with the model year 2012 which shows significant upgraded features such as new transmission already used on the Range Rover Sport, but also news in terms of performance, lower power consumption and new equipment that make the car one of the most versatile SUV in the market.

British engineers have upgraded thr 3.0-liter turbodiesel engine with the innovative parallel turbochargers system and a third-generation common rail. The 2012 Discovery 4 is available as two variants, the most powerful by 255 hp (+10 hp) and 600 Nm of torque at 2,000 rpm, while the lower version Delivers 211 hp and 520 Nm of torque at 2000 rpm. For this equipment the Discovery 4 declares CO2 emissions at 224 g/km of CO2. The most interesting news is the introduction of the new 8-speed automatic transmission with steering wheel paddles and instead of the traditional shift lever has been added a knob to select 5 different driving modes: Park, Reverse, Neutral, Drive and Sport .

From the standpoint of design stands the new alloy wheels, to be chosen from 19 and 20 inches, while the optional list is divided into four packages of accessories: Technology Pack, Option Pack, Luxury Pack HSE and Vision Assist Pack. The Discovery 4 features all the infotainment systems normally available in the Range Rover range, including the “Say What You See” system, which allows the driver to interact vocally to run some functions of the British SUV. Regarding the Discovery 4 balance and all the driver assistance systems, there are no updates, remains the traditional Terrain Response, which had recently been revised with the addition of the Hill Start Assist system and Gradient Acceleration Control which acts on the limiting speed by reducing  the speed of 5 km/h up 20 seconds. The Land Rover Discovery 4 is sold in Europe at prices starting at 45,500 euros.