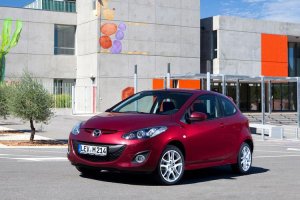 Mazda has introduced some changes to the list of the 2012 Mazda2, which with the model year 2012 features new richest versions. The 2012 model is now available in four engine and the same outfits, it comes with a low weight about 990 kg, aluminum engines and high-strength steel structure, which offer an improved car balance and safety in case of accident.

Two new versions gasoline named “Energy” and “Start”, equipped with a 4-cylinder 75 and 84 hp, those promise to travel up to 20 km with one liter of fuel and generate only 115 grams of CO2 per km in the combined cycle. The 95 hp diesel variant, however, according to the auto maker, claims an average fuel consumption of 4 liters per 100 km and 110 gr/km of CO2. In terms of safety systems all 2012 Mazda2 are also equipped with emergency brake assist (EBA) and six airbags.

The base version, the Start 1.3 3-door, starts at 11,950 euros and will feature standard air conditioning, sound jacks to connect your iPod or smartphone and radio CD with MP3 player. In the version Energy, which is listed from 12,700 euros, it’s offered a better sound system with two more speakers, a trip computer, steering wheel audio controls and fog lamps. The top of the 2012 Mazda2 range are the Trendy (from 13,700 euros) with 15″ alloy wheels, automatic climate control and sports trim, while the second high-version, Sporty, include 16″ alloy wheels, rear spoiler, side skirts, daytime running lights, rain sensors and cruise control but only combined to some engines.