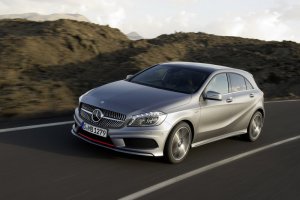 The Mercedes A-class was officially exposed at the last Geneva motor show in March. The new car has been re-engineered based on the new modular front architecture from the ground up.

The newest Mercedes A-class adopts a heavily sculptured look with a bullish front end dominated by shapes with the traditional starry sky style. One of the most fascination are the full-LED high-performance lights with 90 optical fibers arranged to look like wings into the lamps. The curved rear window with the large spoiler on the top of the tailgate complete the well done design. The size in length is up at 4292mm, width at 1780mm and height of 163mm, all enough to claim a drag co-efficient of just 0.26 and to be a class-leader.

A seven speed dual clutch is option while a manual gearbox unit is offered as standard. The stop-start system see the A160 CDI achieve average CO2 emissions of just 99g/km for the first time.

The Mercedes A-class car will be available in Uk from £24,000 and will challenge the BMW 1-series and new Audi A3 and of course the Volkswagen Golf.