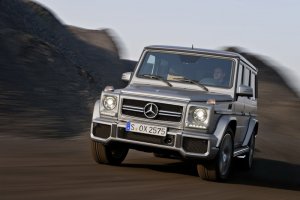 Public images of the Mercedes-Benz G63 AMG have already been released on the web ahead of the battle strong SUV with scheduled public first appearance at the Beijing motor show this month. The massive German car shows off a deep brand new front bumper, a double slat grille along with large cooling ducts, double exhaust pipes behind the rear wheels, and typical five spoke AMG alloy wheels that include 9.5 x 20 titanium-grey-painted with 275/50 R 20 tyres. The 2012 G63 AMG enters brand’s range models as a substitute for the old an well-known Mercedes-Benz G55 AMG.

Inside the cabin has been granted a reorganization, including a new instrument panel with infotainment, assist systems, a new color TFT screen, gear display and AMG menu. The outstanding atmosphere is a feature in this new G63 SUV thanks to a designo leather upholstery with exclusive leather door panelling.

Power to the new engine comes from the twin-turbocharged 5.5-litre V8 direct-injection petrol power-unit mated to a fresh made seven speed automatic transmission . The G63 AMG produces 535bhp and a sturdy 560lb ft as torque. Those data mean an improvement in power and torque respectively by 43bhp and 44lb ft more than the today’s supercharged 5.4-litre V8 power plant mounted in the G55 AMG.

The drive to the four wheels is channeled permanently via three separate differentials that can add better off-road’s abilities by the manual locking function from the console. What is going to be included is the automatic stop/start system and brake energy recovery, those for first time a facelifted G-class model. Now the 5.5-litre V8 biturbo engine enables the new G 63 AMG to make a sprint from rest to 62 mph in an unexpected 5.4 seconds, while top speed of 130 mph is electronically limited.

In terms of efficiency Mercedes claims a fuel efficiency in the combined of 20.4 mpg that return in a less 2.7 mpg of savings. Such improvements are confirmed thanks to a new fuel economy converter, transmission oil thermal management and friction-reducing bearing.

The Mercedes G63 AMG it’s set to arrives in the end of 2012, with awaited pricing and specs.

Pictures of the G63 AMG