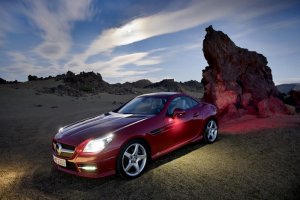 Waiting for Frankfurt to see the SLK55 AMG.

At the Frankfurt Motor Show to be held next September 15 to 25, the Mercedes SLK55 AMG in back, one of the most powerful versions among German roadster. The news, compared to the current version, is the 8-cylinder that develops a max torque of 540 Nm and allows the SLK55 AMG to emit 199 g/km of CO2, the 30% less. This is thanks to the start/stop system and a new F1-inspired AMG Cylinder Management that allows the car to run with the use of just 4 cylinders when full power is not required. Another change is on the engine sound, the exhaust system comes with the double-valve silencer, which starts when the SLK55 AMG engine exceeds 2,000 rpm.

The SLK55 AMG is less powerful than the SL model.

Mercedes engineers have decided to remove the two supercharger, used by the E 63 AMG and CLS 63, to achieve both a reduction in weight at only 187 kg and also to not propose a SLK faster than SL. The new SLK55 AMG with V8 by 5.5-L (no turbo) comes with a maximum power of 422 hp.

Alongside the Mercedes SLK55 Amg a new Turbo-Diesel.

According to rumors, in Frankfurt, will be unveiled an esclusive version. the SLK 250 CDI, which will be the first to fit a diesel engine. The new SLK with this important development regarding the use of a 4-cylinder turbo diesel by 2.1-L and 204 hp comes in the period of a successful consolidation of the diesel cars, as confirmed by sales of Mercedes E-Class Cabriolet. Both new versions, SLK55 AMG and SLK 250 CDI will be marketed in early 2012.

Next post: 2012 Toyota RAV4 EV confirmed to be sold to the general public