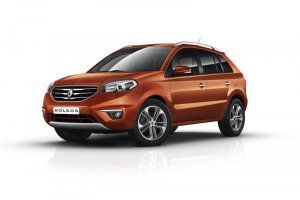 Renault presents the new facelift of the Koleos, waiting for the definitive change of the brand style, begun by Laurens van den Acker and soon will be materialized with the new Clio and Twingo based on the latest concept DeZir, Capture and R-Space.

FACELIFT: the Renault Koleos, having had small changes in the spring of last year, gets a new nose with two side vents close to a revised chrome grille that is not over double but unique, even the lower part has been redesigned with a larger opening to allow a better engine cooling. Other changes include new headlights and external mirrors with indicator lights featuring LED technology, new wheels and a new orange Cayenne tint for the body. For the rest, the french car remains the same as that revealed in 2008. 2012 Renault Koleos features a luggage compartment (70 liters) with double opening tail gate.

ENGINES: they keep the same as the current model with the diesel version 2.0-liter dCi 150 and 175 hp  and unchanged values ​​of torque and power but with greater efficiency in CO2 emissions. No changes to the Nissan four-wheel drive, while all the standard equipment and  the car structure got the 5 stars EuroNCAP for the deformation rate .

The debut of the new Koleos is expected at the Frankfurt Motor Show which will held in September from 15 to 25.