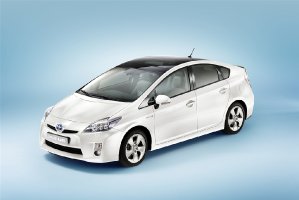 Toyota has announced the sales start of the Prius (Alpha) on the Japanese market. The European version of this car, which will debut at Frankfurt Motor Show (13-25 September), will be at Europe showrooms by mid-2012 as Prius + (plus) and will be the first full hybrid MPV with seven seats in the European market.

The Prius +, compared to the Alpha version is 15.5 cm longer, 3 larger, 8.5 higher and comes with a increased wheelbase of 8 cm. The European Prius will also have only the version seven seats, which are arranged in three rows, while the Japanese Alpha has both  5 and 7 seats. The design features a sleek style with a drag coefficient of 0.29. Regarding the interior, stands out the panoramic roof made of synthetic material saving 40% of weight compared to a conventional glass. The new format with the third row of seats made possible to install a lithium ion battery between the two seats of the second row, without compromising passenger comfort and load space.

The Prius + features the latest transmission Hybrid Synergy Drive with the same driving unit of the Prius sedan. As on the standard version, available three driving modes: Ev, which uses only electric power on short distances, Eco, to optimize the efficiency of the hybrid system and minimize both fuel consumption and emissions; Power, to get the greatest performance.