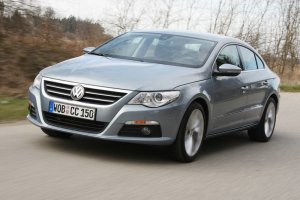 Volkswagen CC comes after four years and 270,000 Passat sold worldwide, now gets a new European name and facelift to be still an attractive sedan, which debuts later this month at the 2011 Los Angeles auto show, just started in 18th of november. The 2013 Volkswagen Passat offers some long-searched styling details to stay updated with the VW brand’s more recent design language.

Although most of the old version’s shapes remains unchanged, both front and rear fascias comes renewed in the new model. The redesigned front receives some new redesigned parts as the hood, trapezoidal chrome-trimmed grille, Bi-Xenon headlamps with LEDs, revised lower air dam and bumper. Similar adjustments can be observed at the back with the new LED taillights, bumper and boot top designs. To complete the exterior facelift, the German auto maker added a fresh choice of colors and alloy wheel options. The 2013 VW CC will offer also as standard the audio system with CD player, stainless steel sill and front adjustable head-rests. Options include Side Assist Plus with integrated Lane Assist that warns of vehicles in blind spots and assists driver in avoiding an accident by steering intervention, Dynamic Light Assist and the camera that reads the signs. An available option is also the massage function in the seats.

VW has yet to reveal official specs on the new CC, but some leaks tells that new car motion won’t differ much from the existing model. All diesel models will have start-stop systems and standard kinetic energy recovery (during braking) with the CC being offered with various TSI gasoline and TDI diesel power units delivering from 140 hp to 299 hp. Again non official info states that the most fuel-efficient version, the 2.0 TDI with 140 hp can offer a combined fuel consumption of 4.7 lt/100 km.

The new Volkswagen CC will be launched in Germany in February 2012, then progressively throughout Europe and most of the world’s countries.