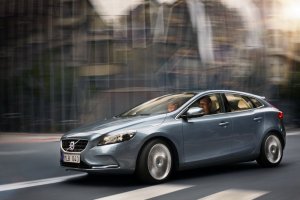 Volvo V40 will fight BMW 1 series and Audi A3

The all-new Volvo V40 prices have been released. The five-door hatchback which features an impressive number of standard features will cost from £19,740. This mean virtually about £455 less than a BMW 1 series 116d, but also £1,000 more than the comparable Audi A3.

Two petrol and three diesel engines, all with stop/start system and with three trim levels – ES, SE and SE Lux to complete the range at launch in September. The most efficient version is with the 1.6-litre D2 diesel 113bhp and offers a 78.5mpg and CO2 emissions of 94g/km which can beat the UK road tax at zero. This engine is also combined to a six-speed manual gearbox while an optional £1485 six-speed automatic transmission is available and kept only for V40 diesel models.

The entry-level V40 ES is offered with the D2 unit, in addition to the 148bhp D3 and 148bhp T3 petrol. The ES trim comes with standard 16-inch alloys, Bluetooth, City Safety, a five-inch colour display, both leather trimmed gear-lever and steering-wheel, electronic climate control, keyless start and chrome touches to the body’s car. Among standard’s safety options the ABS, DSTC and pedestrian airbag. The range-topping SE Lux versions is obtainable with all diesel and only with T4 petrol engine. SE Lux get a 17-inch alloys, leather-trim interior, active Xenon headlamps and LED daytime running lights.

The most powerful unit in the Volvo V40 range is the 178bhp T4 petrol. The brand said that to the range a an even more potent T5 version will be available later. The car maker mentioned that most expensive V40 in the range is the D4 SE Lux Nav with 175bhp which is estimated to be sold at around £26,790.