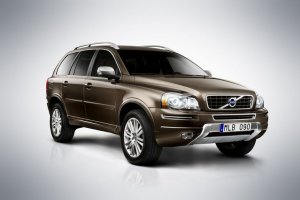 The 2012 Volvo XC90 is now offering its full-size SUV a thorough update, after a 9th year of manufacturing the swedish car maker continues with this model.

Exterior design of the Volvo XC90

New redesign boosts the Volvo XC90 sports appeal and gives the car a more driver-concentratedidentity. Concerning the outside update on the Volvo XC90 is the brand new LED daytime running light arrangement in the bottom bumper to offer the front structures with more personality. Among options that becamed standard is a silver metallic bumper bar, roof rails and the new color-keyed bottom door moulding, while the new tail-lights features LED brake lights. To complete the exterior design of the Volvo XC90, designers have added a new six-spoke, 18″ wheels in matte silver finish.

The cabin of the Volvo XC90.

Many improvements are given to the cockpit of the Volvo XC90 to make it even more deluxe, such as, aluminum trim,the three-spoke steering wheel, the watch dial-inspired instrument style with white lighting effects. Other improvments regard the load cover with new color as well as the split tailgate with leather handle.The new specification trim report that the 2012 Volvo XC90 features some exclusive options such as soft leather seats with ventilation and massage. The configuration of the the Volvo XC90 R-Design gets a touch of sportiness, with the addition of 19 “wheels, lowered suspension, redesigned upholstery, inlays and redesigned door panels. In addition, some updates to the system Volvo On Call , which is now combined with the Bluetooth connection.

Previous post: 2012 Hyundai i30 redesigned and unveiled at Frankfurt