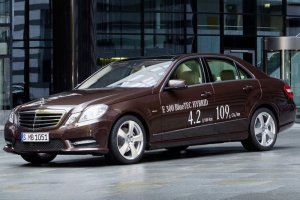 Mercedes is releasing a hybrid-powered car with its new Mercedes E-class. The E-class models are already among the most varied models in Mercedes-Benz’s portfolio, with coupes, cabriolets, and sedans to choose from. Now Mercedes is planning to add even more diversity to the E-class line with two hybrid-powered models, bringing an eco-friendly element to the bunch. Both the E300 and its petrol, U.S. equivalent, the E400, will be debuted at the Detroit Auto Show in September of 2012. Many industry insiders speculate that Merecedes-Benz’s Hybrids are a response to the Hybrid BMW 5, which was recently revealed.

Both of the new hybrid E-Class sedans combine the same electric motor.

The bluetec diesel-electric E300 will be released in Europe and will be available in both sedan and wagon models. Designed for heightened fuel economy and efficiency, this E300 BlueTec Hybrid will use the most powerful version of the Mercedes’ 2.1 liter turbodiesel 4-cylinder. The 201 bhp, 369 lb-ft diesel engine connects to the 27 bhp electric motor within a gearbox housing. The E300 is expected to go from 0 to 62 mph in just 7.5 seconds and reach a top speed of 150.

Both the E300 and E400 will feature a lithium-ion battery pack and a 20kW electric motor. These hybrids can be used as a diesel or gasoline vehicle with a start/stop system for optimal fuel economy. The regenerative braking keeps battery charged.

The E400, intended for U.S. markets initially, combines the electric motor with a 3.5-liter V6 gasoline engine, rated at 302 horsepower and 273 lb-ft of torque. While the Mercedes E350 sedan has an EPA fuel economy of about 20-30 mpg, the E400 should achieve an EPA of about 24-31 mpg, from city to highway driving.