PORSCHE 918 SPYDER, THE MOST EXPENSIVE EVER 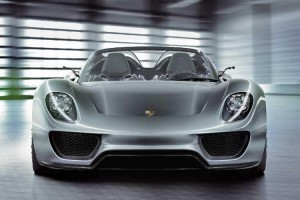 The Geneva motor show on last March presented a hybrid Porsche 918 Spyder, a super car powered by 500 hp engine. At beginning what seemed only a draft of a “concept car” but now could become reality. The rumor was released by american Bloomberg from a Porsche head who adds that the new model could cost 500,000 euros. This target for a limited production has been possible thanks to the written commitment made in advance with about a thousand customers worldwide, says the head of the Porsche.

Must be remembered the time of the Carrera GT sold from 2004 to 2007 where buyers spent 460,000 euros per unit and were sold around 1550 units. At that time, were not perceived effects of economic crisis, the German mark had estimated that in Europe there were at least 10,000 people willing to pay almost € 600,000 for a luxury or sports car.
The fireball of this decade, also seems to inspire the new Porsche 918 design, a two-seater sports car, powered by a V8 petrol engine, 3.4 liters, 500 hp. To the classic engine will be produced the electric one, for each axis, reaching a power of 160 kw/217. Regarding performance, the german house says 3.2
second “0-100” and declared a speed of 320 km/h, consumption is incredibly low,
at least is what Porsche says: less than three liters per 100 km.

The hybrid super car shows on the roads of California …
[youtube]

Next post: GREAT WALL HOVER 5 RESTYLING 2010, SUV MADE IN CHINA