$4M Ferrari Crash in Japan, one of the most expensive accidents in history

Eight Ferrari, three Mercedes-Benz and one Lamborghini Diablo were involved in a 14-car crash in Japan on December 4. The incredible accident happened with luxury sportscar enthusiast ended in a massive freeway pileup. The group of foreign drivers, at around 10:16 am, were heading to Hiroshima from Kyushu when one of the several Ferrari’s drivers lost control trying to overtake – probably starting a kind of illegal racing – another Ferrari on a wet curved area of China Road in Yamaguchi Prefecture. 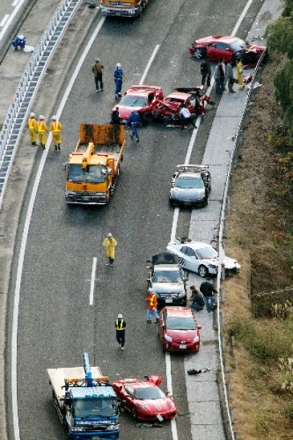 No one was seriously hurt in the crash, but as reported Bloomerg “It was a gathering of narcissists”, with drivers aged between 37 and 60 years. The 60 ages in fact is suspected of causing the 14-car pileup and, could deal with six months in jail and pay $1,284.03 for the accident. The massive car crash is predicted to generated at least $1,5 million in damages. It required six several hours to empty the highway of destroyed cars and get drivers to the hospital. The eight Ferrari cars token part to the huge impact appear to include multiple F355, F430– including a Scuderia model- a F360 and some F512.