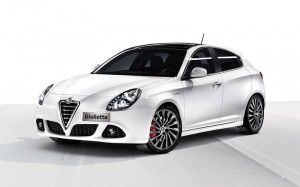 Alfa Romeo Giulietta updates range with new engine 2.0 JTDM-2 140 hp, presented at the last Paris Motor Show, and as alternative to the 170 hp engine available since the launch of the Italian model. The engine equipped with the MultiJet common rail system – already in the 1.6 105 hp and 2.0 170 hp, and combined with electronically controlled variable geometry turbocharger, according to the manufacturer, generate 350 Nm of torque at just 1,750 rpm with the switch DNA position in Dynamic and 320 Nm at 1,500 rpm in normal position. This is an engine that compared to the relative Multijet-2 170 hp promises a fuel economy estimated at 0.2 km/l  less in the three cycles (4.5 l/100 km on average), then emissions carbon dioxide reduction drecrease from 124 to 119 g/km. Coinciding with the new engine JTDM-2 debut, Alfa Romeo Giulietta range comes with the new “Style Pack”. Available only for the Distinctive version, the new pack level propose 17″ sports alloy wheels with turbine design, satin ice mirrors, burnished headlights, side skirts, dark interior and dashboard inserts with black anodized aluminum and sportier trim. In addition, the navigation system Blue & Me, developed specifically for Alfa Romeo by Tom Tom and available for other cars in the group as MiTo, now you can have this device on Julietta, perfectly integrated in the dashboard. The price list of Alfa Romeo Julietta with the new 2.0 JTDM-2 with 140 hp, available with pack Progression and Distinctive, is respectively on average, 23,800 €  and 25,500 €, 1,700 less than the Giulietta JTDM-2 170 hp.