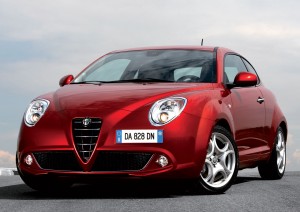 Alfa Romeo presents, at Paris motor show, the green version of the MiTo which is the 1.3 JTDM-2 ECO, a small 95 hp turbo diesel which limits CO2 emissions to 104g/Km. The project of the Italian car was developed and produced by FPT (Fiat Powertrain Technologies). This engine is equipped with new Common Rail injectors that control, with high precision, the amount of fuel injected into the combustion chamber, with a faster sequence and more flexible than before. The four-cylinder turbo (variable geometry) diesel common rail Euro 5, perform rather than good (180 km/h, 0-100 in 11″6) this thanks to new gear ratios, the Start & Stop system and Gear Shift Indicator, this also improves the average distance which fell from 23.6 km/liter to 25 kilometers per liter in the combined cycle. Again, this further evolution of the 1.3 JTDM-2, is capable, with Injection Rate Shaping, to reduce: noise, energy consumption and, in Euro 6 perspective, up to 30% of oxides of nitrogen. The new engine belongs to the second generation of JTD engines that debuted recently on the Fiat Punto and EVO is the evolution of common-rail injection system began in 1997 with Fiat Group JTD engines.