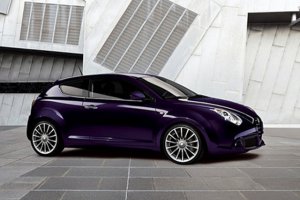 The Alfa Mito TwinAir with the Fiat 500 2-cylinder engine.

The idea announced of an Alfa Romeo driven by an engine with two cylinders sound like a joke, but the Alfa MiTo gets, from Fiat Powertrain, the 0.9-liter TwinAir turbo with 85 hp at 5,500 rpm/min and 145 Nm of torque at 2,000 rpm, the same propulsion units mounted on the Fiat 500, Punto, Lancia Ypsilon and Panda. This downsizing, in comparison to an engine with same power reduced the fuel consumption as well as the emissions.

Considering that we’re talking about an Alfa Romeo, we can not ignore the DNA lever, which on the MiTo Twinair has only two positions: “Dynamic” to obtain maximum performance and “Natural” to cut down the demand for fuel through a important reducing of the max torque from 145 to 110 Nm.
The Alfa Mito TwinAir also features start-stop systems and can sprint from 0-100 Km/h in 12.5 seconds. A 1.3 JTDm diesel engine will also be available with 85hp and 200 nm of torque. Performance details are parallel to the Mito TwinAir, as it gets from 0-100 Km/h in 12.9 seconds.

The latest technical updates affect the MiTo Quadrifoglio Verde, which gets the Alfa active suspension, developed with Magneti Marelli and to interact with other components of the Mito.The MiTo Quadrifoglio Verde is equipped with a four-cylinder 1.4 MultiAir Turbo with 170 hp and a precise power of 124 hp/liter. The power to weight ratio is 6.7 kg per hp and allows the sports Mito to accelerate from 0 to 100 Km/h in 7.0 seconds.

The Alfa Romeo MiTo TwinAir will arrive at the 2011 Frankfurt Auto Show this month with the TwinAir engine. The MiTo joins Alfa Romeo 4C Concept for their world debut in Germany

Next post: 2012 Audi S6 and S6 Avant ahead Frankfurt debut