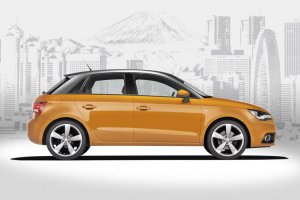 The European Audi A1 Sportback.

The new Audi A1 Sportback has been one of the most attractive car at the Tokyo Motor Show. The new Mini Cooper-sized will be moving into showrooms across the world in early 2012 with the exception of the U.S. market.

A1 Sportback three or five doors at no extra cost.

The A1 is quite small and the more functional, five-door version has the same length as the three door car at 3.95 meters. Even so it comes with a few millimeters taller and wider, thus it offers a little more room for the rear passengers. The extra comfort has no extra cost, on fact buyers can buy the Audi A1 Sportback, no matter if three or five-doors version at same price. Aesthetically the compact cooper is just like the base A1 where the front design requires full LED running lamps and the Audi’s traditional hexagonal grille. The cabin’s options changes from mild to technologically sophisticated. Despite the entry-level models gets the five-speed manual gearbox and fabric trim, high set-up version are available – depending on the engine – with seven-speed dual-clutch transmissions, navigation system with Google Earth function, panoramic sunroofs, high-powered sound system, and WLAN Internet connectivity.

Under the hood almost no surprises, as the engines have been the unchanged from the three-door version. This means a choice of three diesel and six four-cylinder turbocharged petrol units. The petrol range comprises of a 1.2 TSI with 86 hp, a 1.4 TSI engine that delivers 122 hp and a 1.4 TSI with 185 hp. The latter allows for a 0-100km/h acceleration time of 7.0 seconds and 227km/h top speed. On the diesel range the German A1 offers a 1.6-liter TDI either with 90 hp or 105 hp, while the top-engine is a 2.0 TDI with 144 hp that promises a fuel economy on the combined cycle of 4.1 liters per 100 km.

Next post: Toyota GT 86 production Version of the FT 86 revealed at Tokyo