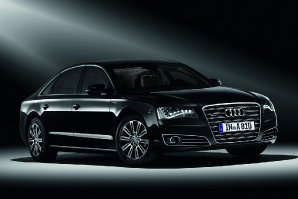 The Audi A8 Security is a large luxury sedan in armored version, 5.27 meters in length, from the aesthetic point of view, the A8 is not distinguished from normal if not in detail.

HAND-MADE: the Audi A8 L Security, in fact, is the result of a extensive additional processing: something like 450 hours to supplement  the armored car’s body, which is then brought to the factory to complete the assembly. The integrated components in the original structure allow to obtain the best possible results of security in accident event, for both security and resistance to attack. Despite the increase in weight, the A8 L W12 Security with 8-speed automatic transmission and Quattro drive reaches 100 km/h in 7.2 seconds with a top speed of 210 km/h and average consumption of 13.5 l/100 km, 18% better than the previous 450-hp W12. Suspension, brakes, and electronics controls are specifically for this release, with special tires capable of supporting weights up to 80 km/h even after damage.

BOMB RESISTANT: The A8 L  Security meets the VR7 criteria for resistance to a firearm according to the bulletproof resistance vehicle  BRV 2009. The explosion proof, however, has been tested against the criteria laid down under ERV 2010 (Explosion Resistant Vehicles). The class VR 7 provides the most stringent requirements for civilian armored vehicles. The sheets metal, glazing must be able to withstand NATO tank attacks. In some places the armor of the Audi A8 L Security meets the standards even in classes 9 and 10.

007 skills: this A8 offers the most special systems that seem taken from a 007 movie: a device allows you to communicate outside without opening the windows, door hinges host a emergency ezplosive, a internal and external plant fire, the system that sends oxygen in the cockpit filtering smoke and noxious gases. Optional “normal” features includes the latest generation driver assistance systems, among the active cruise control with automated brakes and the night vision.

The price has not yet been announced.

Next post: LOTUS ELISE CLUB RACER MY 2011 a lighter version