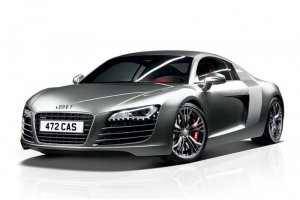 Audi has announced a special limited production to 100 units of the R8 V8 to celebrate the tenth victory at the 24 Hours of Le Mans, gained with a R18 TDI  during one of the most hard edition in the history of this competition.
The Audi R8 V8 Limited Edition will be also limited exclusively to the British market with only the variant coupe which will be delivered to their Anglo customers in October at around 94,000 pounds, about 104,000 euros.

The R8 V8 Limited Edition stands out for the new body color with a special titanium paint available on request, red brake calipers acting on the 19-inch five-spoke wheels to match the bodywork. The rest of the available options with metallic and pearl colors are standard and included in the price. To finish with the aesthetics, the interior features a finish contrasting color in particular on the seats sides, door panels and in the proximity of the handle opening and profiles on the center console. Audi R8 V8 Limited Edition comes equipped with some of the latest generation of infotainment systems as the navigation system, interior lighting package, the Audi Music Interface, the hi-fi audio system by Bang & Olufsen and the Bluetooth interface and the the phone with the seat belt built-in microphones.

The technology detects the road surface through special sensors that control also the driving stlye, the R8 V8 Limited Edition allows you to generate a damping effect by applying a specific electrical charge to the magnetic fluid inside the shock absorbers. The lucky buyers of the R8 V8 Limited Edition will be able to enjoy, included in the car price, a sports driving course at the autodrome of Silverstone.