Audi RS3 tuned to 340 HP by ABT Sportsline 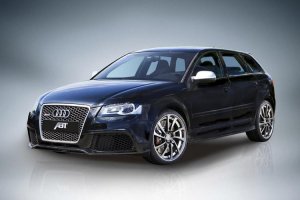 The fast Audi RS3 even more powerful by ABT Sportsline tuning program.

The tuner specialist ABT enhanced a version of the already powerful Audi RS3, a fast car with up to 340 horsepower and 450 Nm at just 1,600 rpm.

We are in the days of 2011 Frankfurt Motor Show, and seems to be the tuning time, while major car maker are showing hot cars. One of most recent example is the German company ABT Sportsline, who decided for a singular decision that the Audi RS3 doesn’t have enough power.

Audi RS3, being absolutely one of the hottest hatchbacks around here, just got a new tuning package, which makes it even faster and more powerful. According to ABT Sportsline, the Audi RS3 has been boosted with a substantial increase of 80 hp when put next to the 335 horsepower, from the standard Audi RS3 2.5 liter TFSI unit. However ABT Sportsline goes even further than that and offer a two-level tuning-package (Power and Power S),and the second one it’s definitely even more appealing, with its 462 horsepower and 630 Nm of torque, both editions is qualified to arrive at 285 km/h.

For the tuning of the Audi RS3, ABT Sportsline is also featuring new 19 “ light alloy rims, combined to tires 255/30R19 for the front and 225/35R19 at the back including two tailpipes of stainless steel and double output.

Next post: 2012 Hyundai i30 redesigned and unveiled at Frankfurt