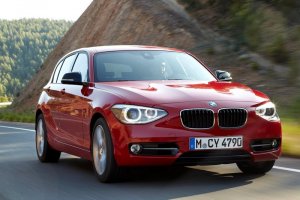 The new BMW 1-Series will be presented after summer at Frankfurt Motor Show, but a German website has released new web photos for the second generation of the compact model. The  car is all new, but keeps the typically format, which will compete in the premium compact market, especially with the new generation of Audi A3 and Mercedes A Class.

The design of the BMW 1-Series, now only with five doors, recalls a model rather discussed, the 5-Series GT, especially at the front. The body sizes are bigger than current model: height 432 cm, width 177 and 142 in height, so the wheelbase has increased also (now is 2.69 meters), as well as comfort and cabin space. The trunk of the new Series-1 also benefits from a greater load capacity of 360 liters. BMW claims to have done an excellent job on suspension to give greater comfort to passengers while maintaining  still the driving pleasure provided by the rear-wheel drive and the 50:50 weight distribution between the two axles.

New interior images shows the revised instrument panel that integrates the latest iDrive with 6.5 or 8.8-inch screen and web browsing. Among the standard optional stands out the anti-collision system and the one that recognizes road signs.

The 2012 1-Series is the first car in its segment to be equipped with an optional 8-speed automatic transmission, with Stop & Start system on all engines. Among the new engines that will feauture the new BMW 1-Series there are two versions 1.6-L turbo-petrol 4-cylinder by136 and 170 hp, which will replace the current 1.6 and 2.0-L  122 and 170 hp, without any increase in fuel consumption and emissions. The 120d with 184 hp, which is top of the range now, starts from 0-100 km/h in 7.2 seconds and reaches a top speed of 228 km/h, while the 116d by 115 hp, declaring an average consumption of 4.3 l/100 km. All engines will be combined with the 6-speed manual transmission or, as mentioned above, an optional new ZF 8-speed automatic transmission. At the moment it seems that the range of the Future BMW 1-Series will have two packages to choose from, the “Urban” and “Sport”, but there aren’t more details about it.

Previous post: Audi A1 Clubsport Quattro: a vehicle built to the limits of technology